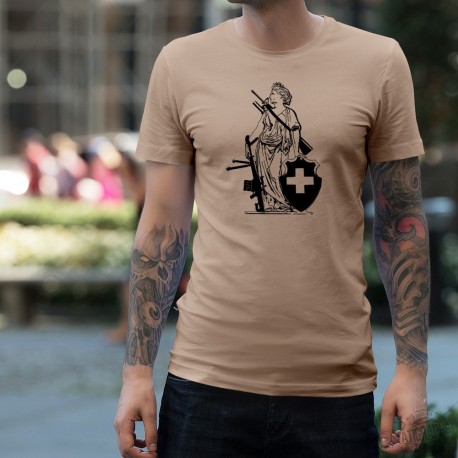 Funny T-shirt illustrated with Lady Helvetia having exchanged her lance for a more modern armament...

Funny T-shirt illustrated with Lady Helvetia having exchanged her lance for a more modern armament...

The name of Helvetia originates from the Helvetians, a Celtic tribe who occupied the Swiss plateau from 100 BC. J.-C.

In the seventeenth century, the Confederation did not yet have strong symbolic representation and it is only in the nineteenth century that Switzerland will rediscover the Helvetii who will be gradually incorporated into the popular imagery of the founding ancestors of the nation as for example Guillaume Tell.

With the new federal state and the first federal constitution of 1848, Helvetia became the national emblem. Since then, this symbol is omnipresent that it is in the form of a work of art, monuments, stamps or coins.

* Available in White only