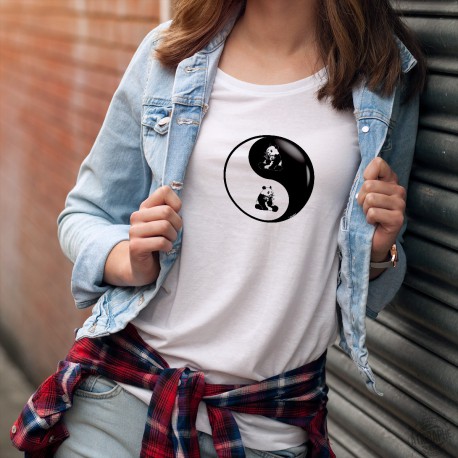 Lady T-shirt with a very feminine cut illustrated with a giant panda inside Yin and Yang.

T-shirt with a very feminine cut illustrated with a giant panda inside Yin and Yang.

The giant panda is a mammal that lives only in central China, in mountainous areas covered with highland forests, such as Sichuan Province, parts of Shaanxi Province or the Tibet Autonomous Region.

Its Chinese name is "big cat-bear", it weighs from 80 to 125 kg and measures from 1.50 to 1.80 meters in length. It is mostly made of white, with the ears, the legs and the outline of the black eyes. The panda has six fingers including a "fake thumb" opposable to his five fingers.

Herbivore, It has 42 teeth to grind bamboo. Its hearing and smell are very fine but its sight, on the other hand, is rather mediocre

This T-shirt made from breathable functional fiber are perfect for sporting activities and are often worn in everyday life. Tthe printing pattern is endless washable without loss of quality.