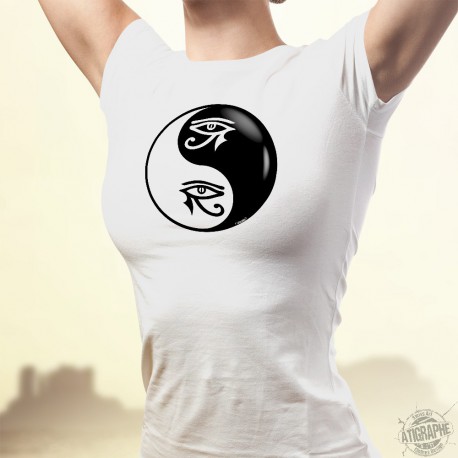 Lady T-shirt illustrated with the tribal Horus eye inside Yin and Yang.

This T-shirt is illustrated with the tribal Horus eye inside Yin and Yang.

The eye of Horus, also called eye Oudjat is a protective symbol representing the eye of the falcon god Horus. According to the myth, Horus, son of Isis and Osiris, would have lost his left eye in the fight against his uncle Seth to avenge the murder of his father. Seth would have torn it and cut it into pieces and threw it into the Nile. Thot would have found all the pieces except one. Thot then adds a magic link so that the eye works.

Since then, countless amulets in the form of Oudjat protect their bearers. The Oudjat eye is also painted on the prows of boats, allowing them to "see" and hold their course.

This T-shirt made from breathable functional fiber are perfect for sporting activities and are often worn in everyday life. Tthe printing pattern is endless washable without loss of quality.